Minooka senior runs for school board: inspires students in the area 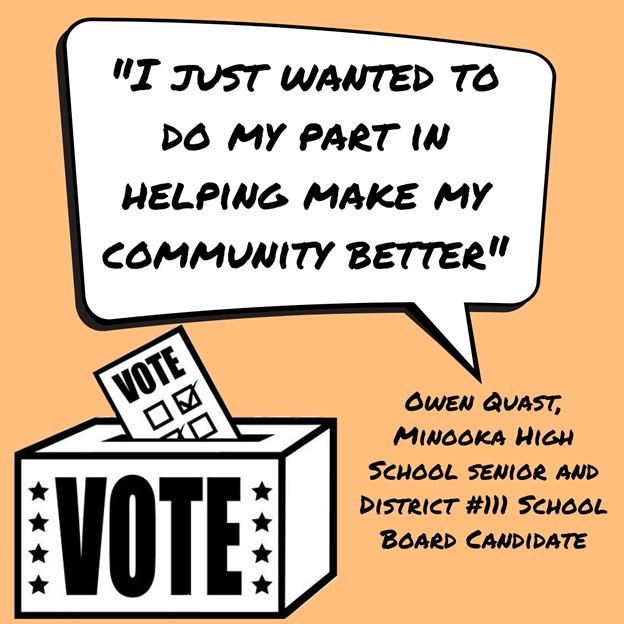 "I just wanted to do my part in making my community better," Quast said.

The job of a school board in America is to ensure the needs of the student body and community are prioritized but what happens when a student decides to take matters into their own hands? One local high school senior is inspired to do just that.

Minooka senior, Owen Quast, is running for Minooka District 111 school board in hopes of making his school and community a better place.

“I saw a lot of other movements that were going on around me,” Quast said. “And [there is the] giant petition to change the mascot [Minooka Indians] and I just wanted to do my part in helping make my community better,” he said.

Quast is no stranger to community involvement. He currently holds a leadership position in his school’s Allies in Diversity Club and is involved with MCS Voices, a political activist group.

The Quast campaign’s main issues and goals include starting a student ambassadorship program, changing the school’s controversial mascot, and promoting transparency and diversity.

Describing it as small and grassroots, Quast’s campaign is run by students, for the students. His team consists of a few friends and fellow high schoolers, all hoping to bring student voices to the forefront of the Minooka in order to create a better dialogue between students and board members.

“From my personal experience as a student at MCHS, I would say the communication between the school board and the student body is not sufficient enough for the board to represent the interests of the student body,” he said.

During the COVID-19 pandemic, campaigns have had to get creative in how to get the word out to voters. Social media has become a staple in any COVID friendly campaign.

“We are definitely going to be a pretty active social media campaign” said Holmes.

The idea of changing Minooka’s school mascot, the Minooka Indian,  has been a hot topic for years in the area, with some members of the community claiming it honors indigenous people and others arguing just the opposite.

After the campaign posted publicly on Facebook for the first time, it was met with mixed reactions. Some question his qualifications to sit on the board or disagree with Quast’s platforms, especially the idea of changing the mascot.

However, Plainfield South senior, Brook Anderson, believes that Quast is up to the task.

“I absolutely believe he is qualified because they are in school and the decisions being made are impacting them,” she said. “I wish Owen the best of luck, and I really hope he gets the spot because I really think if we get a high school student up there, on the board and make those decisions, I think big changes will come.”

Some commented words of encouragement, noting the importance of having a student voice on the board and offering their support.

Even students outside of the Minooka district commended Quast for his efforts.

“I think it’s really inspiring that Owen is running for school board because I think he could be a role model even to kids in his own grade,” said South junior, Carsen Reda.

But how could a high schooler running in Minooka affect future elections in Plainfield?

The only requirements to qualify to run for Plainfield District 202 school board are to be a United States citizen, resident of Plainfield for at least one year, be at least eighteen years old, and a registered voter. Board members must maintain residency for their full term.

The board has a slew of responsibilities including decisions regarding curriculum, school safety, and operations. Additionally, the school board employs the Superintendent and works with the teacher’s union to negotiate union contracts.

Plainfield school board candidate Toni Galan believes if a student is up to the challenge and qualifies should run.

“If a high school student feels they can represent their community views, they have the time and are willing to make the commitment, then they can circulate petitions to be on the ballot,” Galan said. “Anyone who feels they can positively contribute to our district should run and put the choice in the hands of the voters.’

Galan also adds that voter turnout is typically lower in the consolidated elections and having a young person run may inspire younger voters to get out and use their voice by participating in the election.

Students interested in supporting or learning more about Quast’s campaign may refer to his website, www.voteowen.org where links to his social media accounts, donation link, and other information can be found.