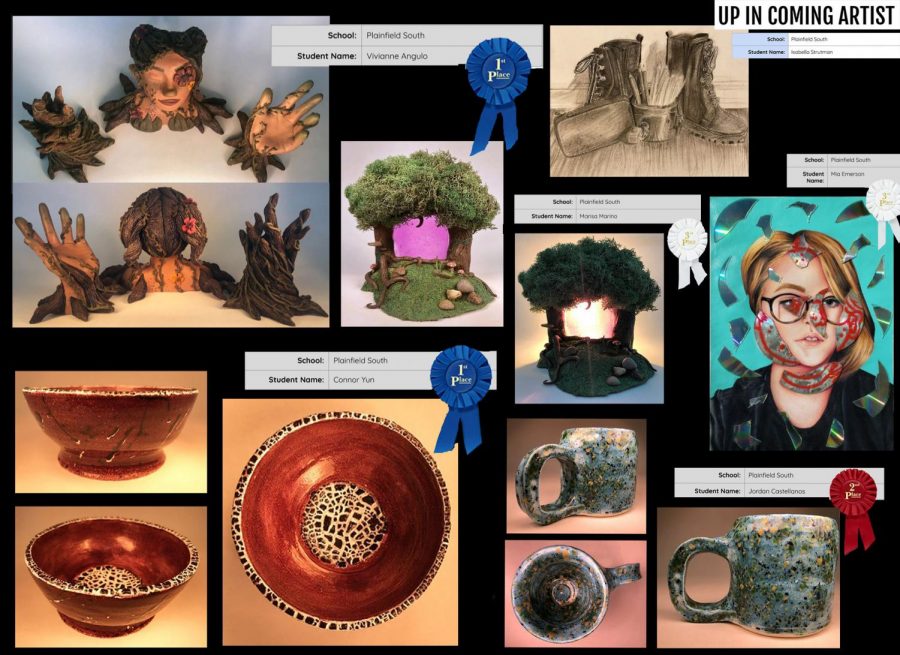 On the weekend of March 6 and 7, the Southwest Prairie Conference (SPC) Art Competition took place virtually, hosted by Plainfield South.

“We feel as a department that Art is appreciated much more when you can see it in person. Despite everything being virtual, our Artwork looked great on the computer. I couldn’t be more proud of our Students and Teachers,” said Daron Wojnowski, a member of South’s Art Department.

The conference had 15 categories for the students to compete in. Placements were announced the following Monday evening with Plainfield South students placing in five categories.

“Each category gets 3 placements (1st = 3 points, 2nd = 2 points, 3rd = 1 point), at the end of the competition we add up how many points each school got and that is how the winners are announced,” said Brooke Twohill, a member of South’s Art Department.

“I felt fairly confident in the piece I had submitted. As sculpting goes, it was a very meticulous process. Considering it was 3 separate pieces, it had taken me well over a month and a half to sculpt and paint. But I felt really confident in my concept and execution of the piece. I put a lot of time into it and it’s a piece I’m extremely proud of,” said Angulo about her winning ceramic piece.

“I’m really proud of how our students represented PSHS this year, they managed to create some tremendous work in spite of the unusual circumstances,” said William Harvey, an Art Department member.

Overall,  South placed second behind Oswego and in front of Plainfield East.

“South finished 2nd and we are very proud of them! Our school has finished in the top 2 in conference every year since 2013 which speaks volumes about our art program and student/teacher dedication,” said Twohill.